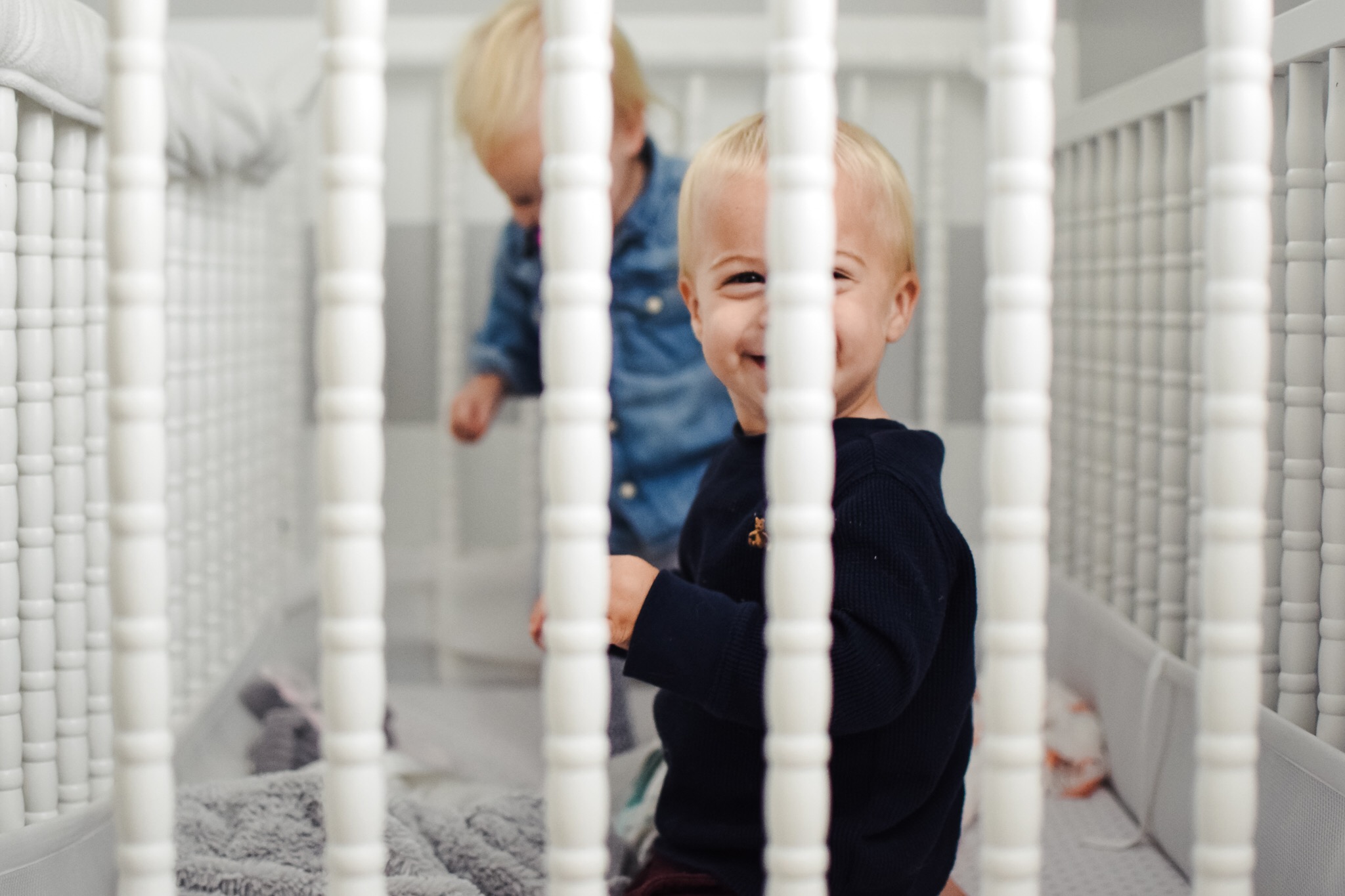 Mothering 16 month old twins is exhausting. They are constantly moving and into something. It never stops. But there’s an upside to the whole two baby thing… they have realized that each other is a separate thing, they are taking notice of what each other is doing and starting to form that “twin” relationship which absolutely melts my heart… Ev finds everything E does to be the most hilarious thing she’s ever seen and E loves his sister and delights in giving her ALL the hugs! They’re really entertaining each other which is nice but along with that comes the fights and meltdowns caused by each other… and oh boy are they trying…

They are turning into little parrots. Ev tries really hard to imitate all motions with her mouth that I make with mine so we’ve been doing words that have exaggerated mouth movements like “woah!” and “wow!” which are two of her current favorite words to say. Easton is doing great with words but has also found a new love for gibberish… I have NO clue what he is saying but he will “talk” for hours and I can catch one or two words out of the entire conversation.

Easton is showing love and compassion which is just the best thing ever. The other day I stubbed my toe and he came over and sat in my lap and hugged me tight. It was just the medicine I needed =)

Everly is big on repetition right now… she says everything twice… puts up her toys, pulls them out and then puts them away again. We read everything twice too. “more” and “din” (again) are big parts of her vocabulary right now. She is also very anti-hug from Easton but has recently started to give hugs along with her kisses which is so sweet! Her current favorite activity is jumping in her bed.

Their current favorites are cucumbers, blueberry muffins, fish sticks, and kale and spinach balls… they devour them!

We don’t love blueberry waffles or bagels currently… and are also HUGE fans of throwing food off the high chair which is driving this mama NUTS!

Easton is still sensitive to acidic foods but Ev doesn’t seem to have any food allergies or issues.

Favorite Books :  Peek-a-who! Easton thinks it’s so funny when we get to the end and he sees himself in the mirror.

Favorite Toys – Wheely bug still tops the list for the third month in a row, especially since we’ve learned how to ride on it and make it move. Were really into mini cars right now… they love to push them around on the ground and table! We received these cars from IKEA and they constantly play with them.

They still sleep through the night…

8:15 – Breakfast : One of the following… Oatmeal, fruit and yogurt, waffles, or eggs.

3:00 – Activity like the beach or park or run errands… We get out of the house at least once a day.

4:30 – Snack time… Usually some goldfish and a pouch and apple juice

Well we’ve reached the temper-tantrum stage and I’m realizing how much patience this job takes… I’m learning to take deep breaths and count to 5 before speaking or letting the tantrum pass. Motherhood at this stage is as trying as it is rewarding on a daily basis.

Their personalities. They are really coming into their own and starting to recognize what makes others tick… for instance, Easton knows that Ev is not a fan of hugs so sometimes he chases her around with his arms out and giggles as she runs away screaming. I can tell he is going to be mischievous as time goes by.

Not loosing my cookies over the small things… because when there’s two toddlers doing two different things (most of the time, something they aren’t supposed to), something is bound to get broken or trashed, or messed up and squished etc… I’m learning to have patience and go with the flow and not stress the small things.

STILL Weaning the pacifier. We’ve started the process by taking it away during the day… they only get it for nap time and bedtime. The rest of the day they go without. I used to NEVER leave the house without a stash of pacifiers but now we just are learning to handle meltdowns in other ways and by finding new things to occupy their mouths like snacks and drinks.