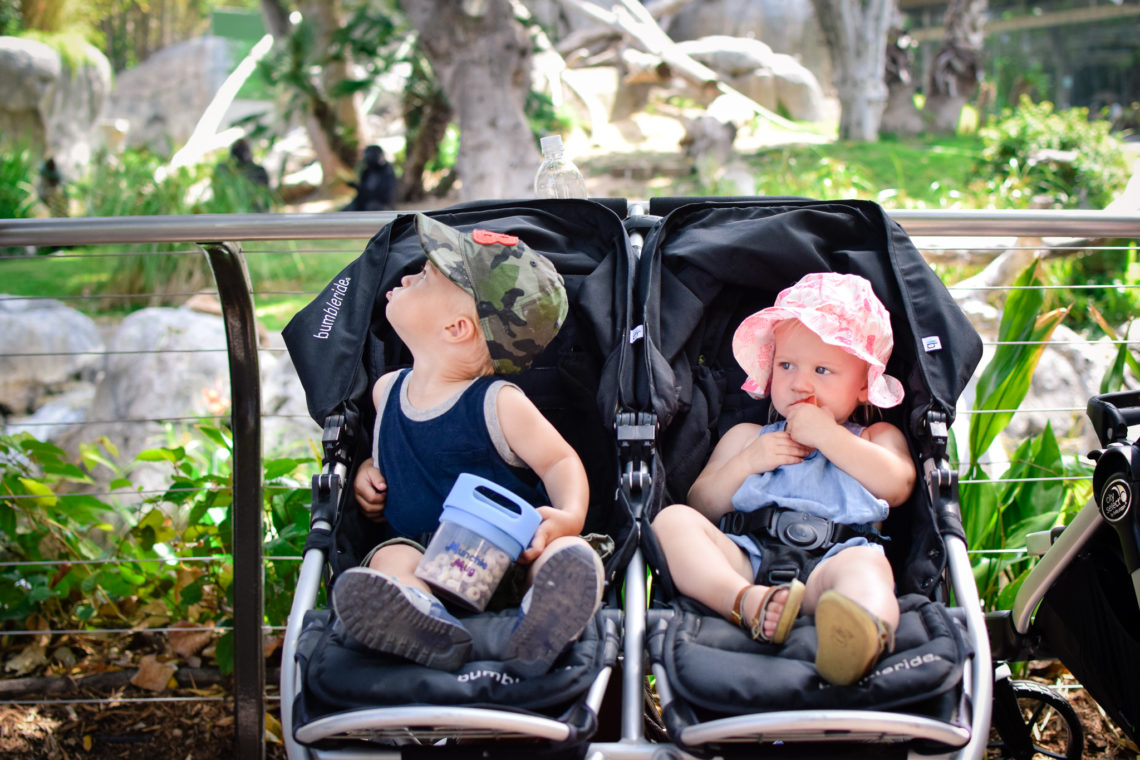 How are my babies 17 months old already? Life with twins is crazy but time just flies by so quickly that sometimes I feel like I haven’t soaked it up enough. This month the babes seem more and more like toddlers each day. They are growing like weeds, Easton has even surpassed some of his buddies in height and Ev has finally started wearing clothing sizes that are meant for her age (she used to always wear a size down)!

Ev has officially learned to say “NO”! She walks around the house shaking her index finger at things and yelling “No,No!” She loves to boss Easton around in her jibberish… I’m not exactly sure what she’s saying to him but it’s usually backed with hand motions and facial expressions. Easton just laughs at her.

Easton has a handful of words but his current favorite is “baNANA” and he really emphasizes the nana part.

Climbing… No place is safe. The both of them are big into climbing but Easton is a bit more fearless when choosing what to climb. His favorite is climbing all the way on top of the table and also on to the back side of the couch. We’re currently dealing with his attempts at climbing out of his crib so I’m sure a transition is just on the horizon.

Eating has really been a struggle lately. They are really attempting to assert their independence during meal times. Ev is very vocal with her “no’s” and Easton shakes his head “no” whenever I put something in front of them they don’t want to eat. Some nights, it feels like they say no to every option I have to offer.

Their favorites are blueberry pancakes, any sort of fresh fruit, avocados, and turkey meat balls.  ( I’m fairly certain these were their favorites foods when they first started solids, we’ve regressed ha)

They dislike any other meat besides turkey meatballs. Ev is NOT a fan of broccoli lately and Easton still doesn’t like peas.

Favorite Books :  Ev loves Flora the Flamingo but Easton tries to rip it so we read it alone. Easton is really starting to get in to trucks and things with wheels so he reads his firetruck book all the time.

Favorite Toys – Wheely bug still tops the list for the fourth month in a row, especially since we’ve learned how to ride on it and make it move. We took Tex to the groomers and Easton picked out a squeaky toy for himself to play with and it’s now become one of his favorites!

No changes on the sleep front, thankfully! They still sleep through the night…

8:15 – Breakfast : One of the following… Oatmeal, fruit and yogurt, waffles, or eggs.

3:00 – Activity like the beach or park or run errands… We get out of the house at least once a day.

Chaotic, but in a really fun, crazy and exciting way… They are these little firecrackers running around, sometimes they explode but sometimes they can light up the sky… Tantrums are real, and Ev can have some serious meltdowns, complete with high pitched squealing/crying and hitting but she usually ends them with a kiss which sort of makes it all better.

Ability… they have more ability to do things on their own, both mentally and physically. They are really understanding and comprehending “how-to’s” so we’ve been playing a lot of “Mommy does it, then you do it” and they get really excited when it is their turn to do whatever it is we’re doing.

Balance… while my favorite part of this age is the ability, it’s also my least favorite part. I’m learning to balance when it is appropriate to let them do it on their own and when it’s just time for Mommy to do it.

STILL Weaning the pacifier VERY SLOWLY but I think our actual next challenge before weaning is going to be moving to a big kid bed. Easton hasn’t quite put it together that he can climb out but his ability to do so is definitely there and I want to start the transition before he has the opportunity to discover that talent. We will be traveling in August so I’m going to wait until we return and settle back into our usual routine to start the transition. I’m thinking late August or early September. The babes will be 19/20 months at that time. Any tips?